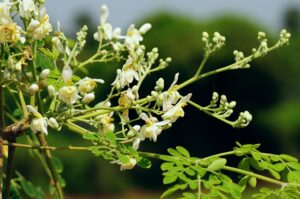 The Moringa Oleifera tree is called by several different names. We mentioned it. It is called by several other names in several regions such as Northeast West Africa, Madagascar, the Arabian Peninsula…etc.
It is a deciduous tree that reaches 15 meters in growth and thrives in semi-desert and sandy environments. It is cultivated as a windbreaker and does not require large amounts of water. It blooms in the month of May, a group of sweet-smelling flowers, and its advantages are:

It is used to improve soil properties.
Feed for animals and beekeeping.
All of its parts are widely used in production.
Drought.
Fast-growing, reaching a height of 3 meters during the first year.
Its leaves are used as very useful food for humans. It is eaten fresh or boiled as it contains calcium, vitamin A, C, potassium, iron, and protein… A small amount of leaves is equivalent to a large number of fruits, vegetables, milk, and yogurt.
The tree is also used as fuelwood and a good source for charcoal production.

They are trees that do not need large, only daily watering during the summer and fertilizing even once a year, and they can also be pruned to control the way they grow and their general shape.

Donate by seed or cuttings (cut from the stem) during the months of June and August for cuttings planted at a depth of half to a third of the cutting. and seed-producing trees.